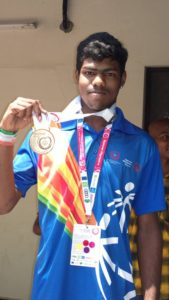 Lok Sai’s mother, Nagamani, is proud of her son. Lok Sai was born to a poor family at BK Samudram. His intellectual parameters were below normal and his parents could not understand what was wrong. They went to doctors in Anantapur, Bengaluru and Hyderabad, spending thousands of rupees. The doctors told them that Lok Sai was mentally retarded and there was no medical remedy. In 2010, Lok Sai’s mother heard about RDT’s special school for intellectually challenged children at Uravakonda and she admitted him there. Lok Sai started by learning life skills like bathing, brushing, dressing and eating. He learnt dance. His teachers identified his potential for sports and admitted him in the Bathalapalli Special Olympics coaching centre. Lok Sai attended floor hockey and floor ball coaching camps in Himachal Pradesh. He was selected for the India floorball team for Winter Special Olympics, 2017, in Austria. The Indian team was pitched against hosts, Austria, in the final. Lok Sai stole the show and scored four goals and India won the Olympic gold. This has changed not only Lok Sai, but also his family. Lok Sai now communicates effectively and has developed leadership qualities.